From May 26th to May 30th, 2019, Jiangsu Jiaming Carbon New Materials Co., Ltd. held a special training course entitled “Following the Red Memory and Promoting the Spirit of Yan'an”. A group of 18 people came to the revolutionary shrine Yan'an for a 5-day training. During the past few days, the participants visited places of historical significance such as Liangjiahe, Baotashan, the Yan'an Revolutionary Memorial Hall, the Wangjiaping Revolutionary Site, the Yangjialing Revolutionary Site, and the Zaoyuan Revolutionary Site. I am even more sighed by the magnificent chapter that Yanan wrote in the history of the Chinese nation. The training and learning schedule was tight, but the trainees showed an unwillingness to visit and study carefully from beginning to end. Although the teaching time is short, the gains for the trainees are considerable. 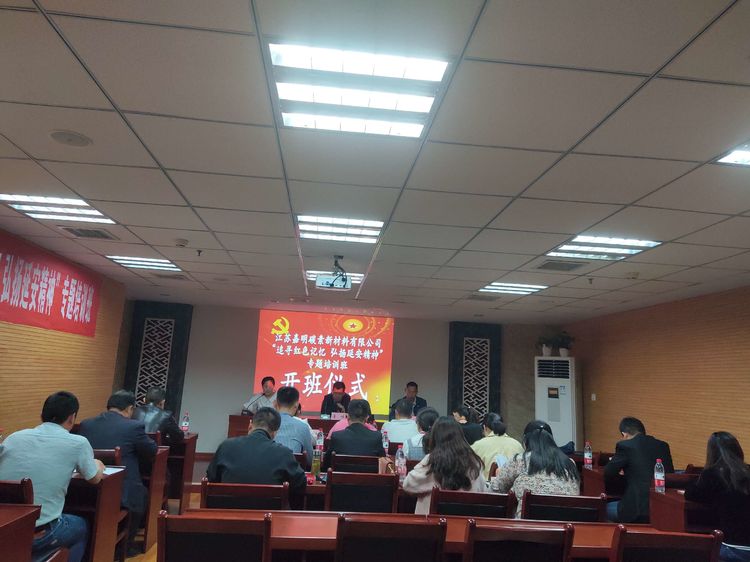 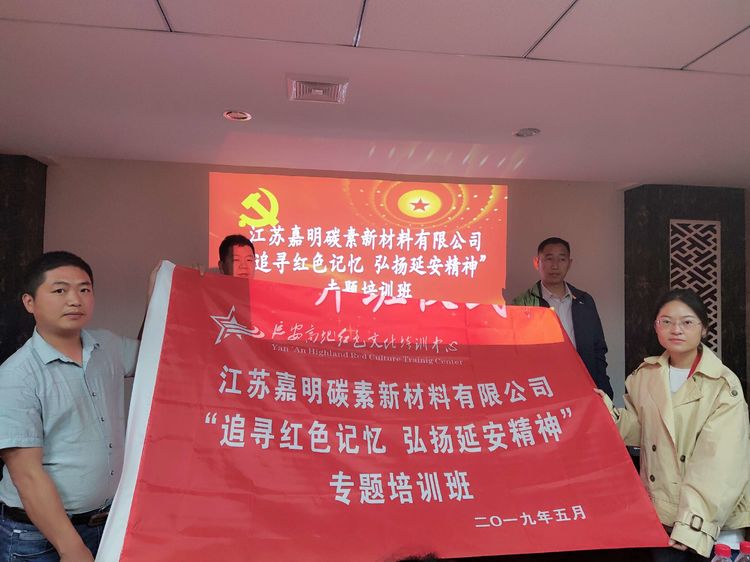 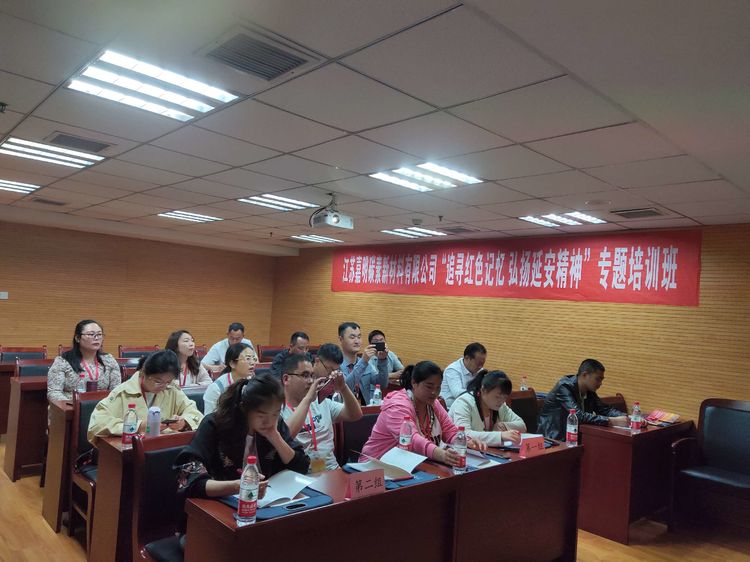 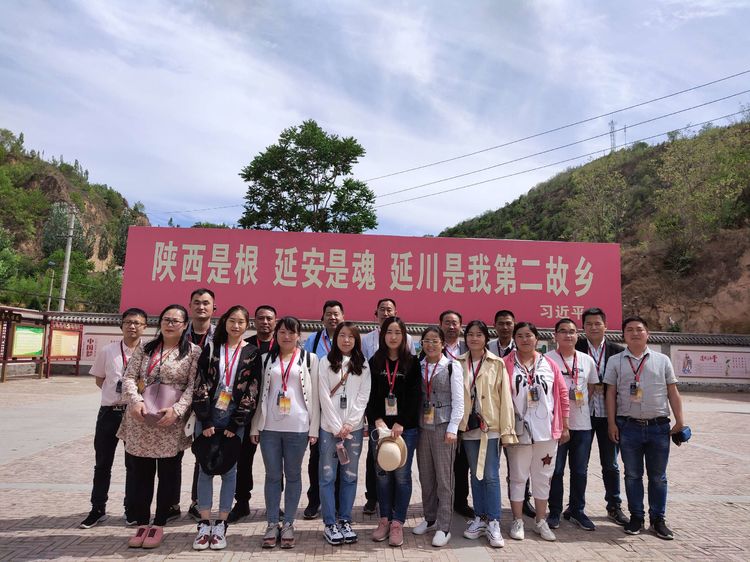 Wangjiaping is located in the northwest of Yan'an City. It faces the city across the Yanhe River. After the Central Committee of the Communist Party of China was stationed in Yan'an, the Military Commission and the headquarters organs here led the soldiers and civilians in the base area for eight years of resistance. After the Japanese invaders surrendered, they smashed the all-out attack of the Kuomintang reactionaries. On March 18, 1947, Mao Zedong and Zhou Enlai led their troops to evacuate from here and fought in northern Shaanxi.
On-site teaching: "Mao Zedong and Mao Anying's affection for father and son." The explainer vividly described the situation when Mao Zedong met with Mao Anying, who was 18 years away, and expressed Chairman Mao's role as an important leader of the Chinese Revolution. In the great practice of people's pursuit of happiness. 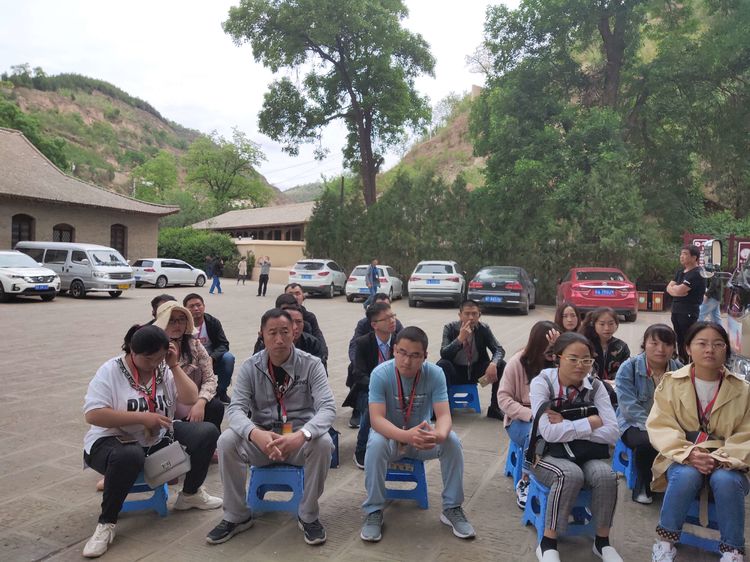 From 1944 to March 1947, the CPC Central Committee Secretariat was relocated from Yangjialing to Zaoyuan. During his stay in China, Mao Zedong wrote "Several Questions on Leadership Methods", "Organize", "Comment on Chiang Kai-shek's Speech on Double Ten", "On the United Government", "The Situation After the Victory of the Anti-Japanese War and Us Many important articles guiding the Chinese Revolution, such as "Guidelines for the Japanese War," "The Last Battle against Japanese Invaders", "About the Chongqing Negotiations", and "Establishment of a Consolidated Northeast Base," included only 28 articles in the "Selected Works of Mao Zedong".
Real-life teaching: Read "Serving the People". "He died for the benefit of the people. His death was heavier than Taishan." Mao Zedong condensed the shining thoughts and morals of Zhang Side into five characters to serve the people.
"The original intention and mission of the Chinese Communists was to seek happiness for the Chinese people and for the rejuvenation of the Chinese nation." In the report of the 19th National Congress of the Communist Party, Comrade Xi Jinping clearly stated the historical role of the Chinese Communists. "Pick the heaviest burden, stiffen the hardest bones ..." These eloquent "golden sentences" have been combined into one sentence, "serving the people". 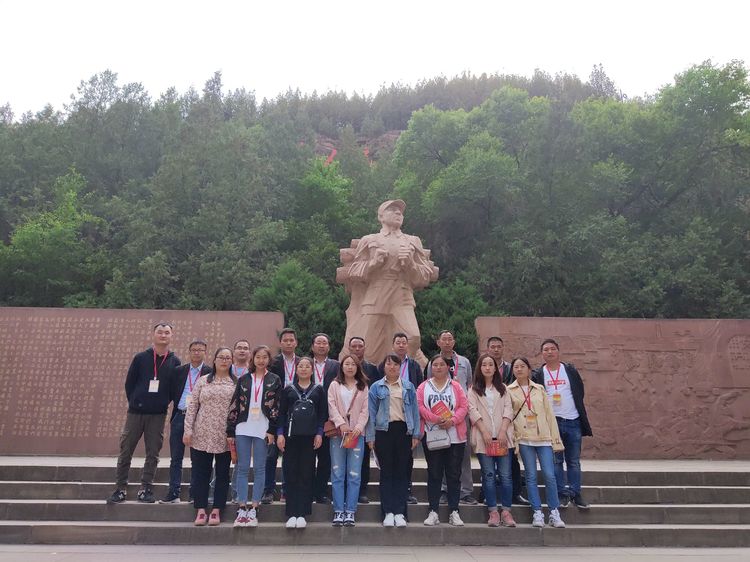 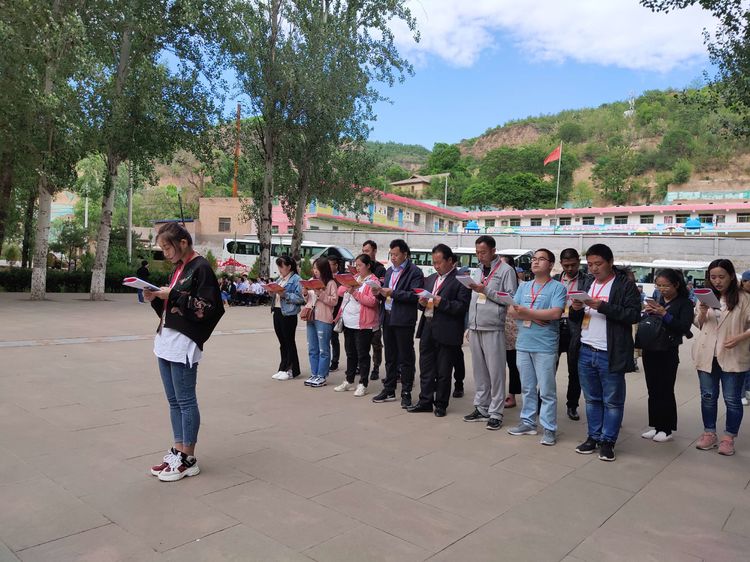 Baota Mountain, located in the center of Yan'an City. After the Central Committee of the Communist Party of China was stationed in Yan'an, this ancient tower became a symbol and symbol of the revolutionary sacred place. After the founding of the People's Republic of China, the State Council classified the Yan'an Pagoda into the former batch of the national key cultural relics protection units in the Yan'an Revolutionary Site. The front face of the second set of RMB coupons for the 1953 edition was "Yan'an Pagoda Mountain".
"A few times back to Yan'an in my dreams, I fixed the Pagoda Mountain with both hands." Below the Pagoda Mountain, all party members recited He Jingzhi's "Return to Yan'an" in unison, rousing the passion of the "mother" Yan'an. Faced with the bright red flag, all members of the party, under the swearing of Comrade Zhang Da, solemnly swore "I volunteer to join the Chinese Communist Party ..."


By revisiting the party's oath, it awakened the "initial memory" of each party member and strengthened his lofty faith in the party. 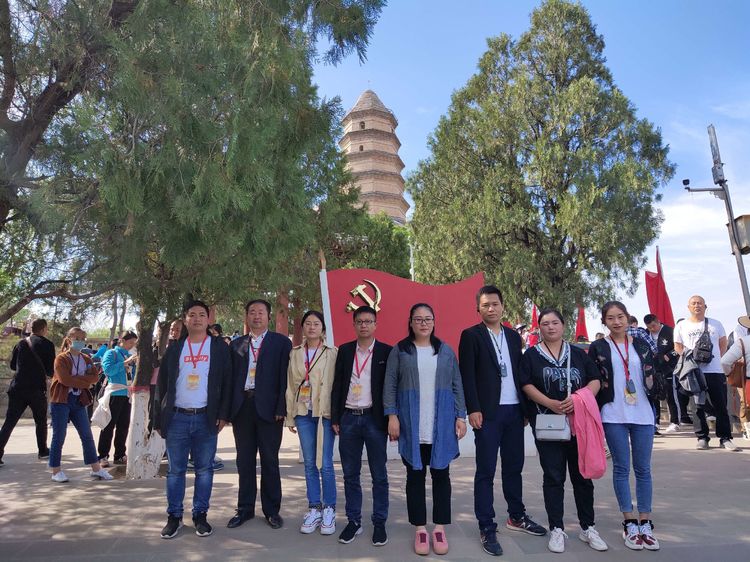 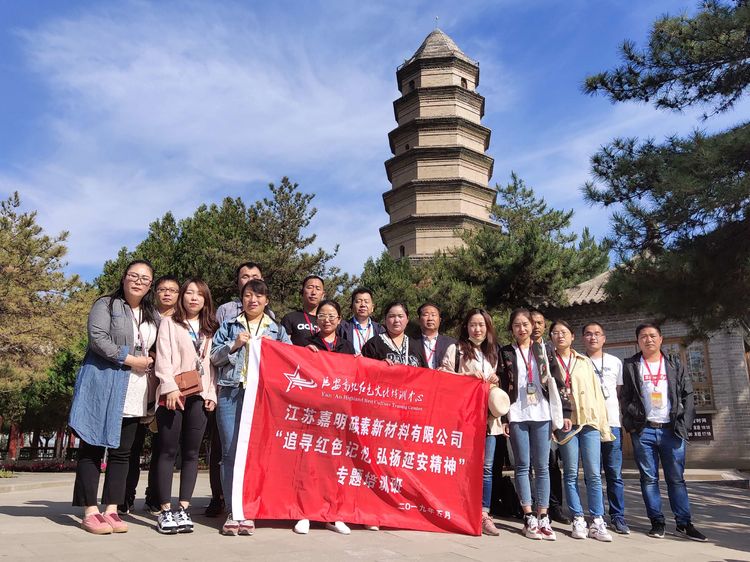 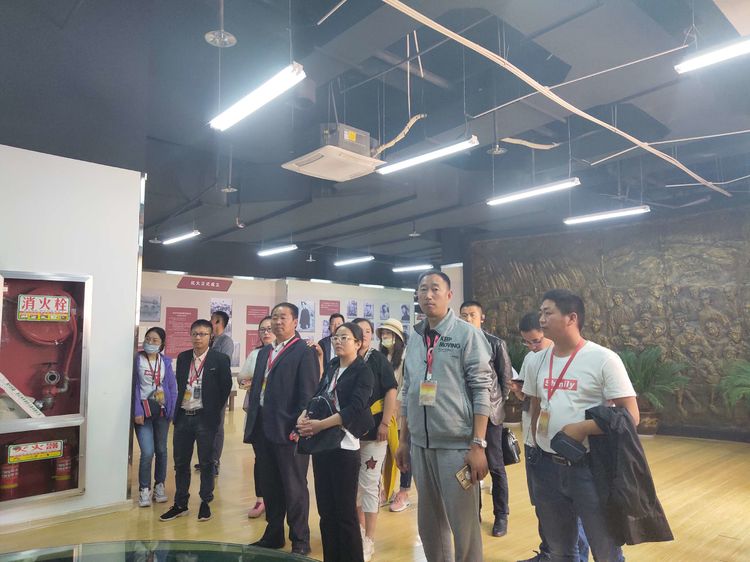 Yan'an resisted university, adhered to the education policy of "firm and correct political direction, hard and simple work style, flexible and flexible strategy and tactics", created various forms of teaching methods, and cultivated a large number of capable people for our party and our army. Wu's outstanding commanders established immortal feats in the War of Resistance Against Japan and the War of Liberation. Yan'an Learning College is located on the west side of the People's Service Center in Yan'an New District. It was established in 2017. It is a county-level institutional institution approved by the CPC's Yan'an Municipal Party Committee. The Academy focuses on promoting the popularization of Xi Jinping's socialist ideology with Chinese characteristics in the new era, and conducts cadre education and training for party members and cadres across the country.
The Academy consists of three main functional areas: the China Dream Exhibition Hall, the Learning Report Hall, and the reading space. "Relying on learning, heading for the future." The eight eye-catching large characters in the middle of the learning academy and the Chinese dream reliefs above it constitute an organic whole, symbolizing that the booming China is heading for a brighter and brighter future.
Facing the new era, new tasks, and new requirements, the academy is based on the tenet of "relying on learning and moving towards the future." Promote the popularization of Xi Jinping's socialism with Chinese characteristics in the new era. This has become a new height for learning and propagating Xi Jinping's socialism with Chinese characteristics in the new era. 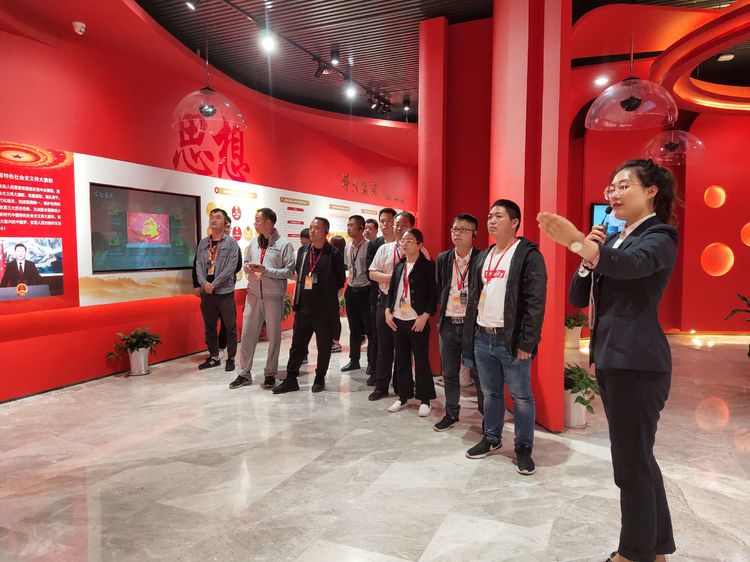 Yan'an Highland Red Culture Training Center is located in Yan'an, a revolutionary sacred place in China. It is a professional red culture education and training institution that focuses on Yan'an spirit and revolutionary traditional culture and improves the quality of cadres and employees. It has first-class teaching in the industry Facilities, faculty and logistic service guarantee system, responsible for party, government agencies, enterprises and institutions, primary and secondary schools, colleges and universities, labor unions, Communist Youth League, Women's Federation, Hong Kong, Macao and Taiwan and power, tobacco, finance, communications, factories and mining enterprises After years of exploration and practice, the red education and training of personnel from all walks of life has formed a relatively unique and complete education and training system, allowing trainees to experience the revolutionary history, understand the red culture, carry forward the spirit of Yan'an, and improve their development capabilities in a relaxed and happy way.